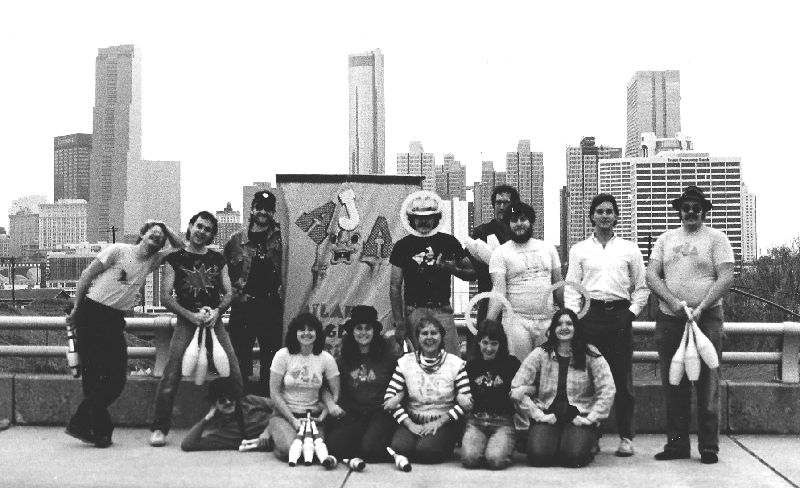 The Atlanta Jugglers Association was founded by Rodger French and Toni Shifalo, a pair of clowns who performed throughout the Southeast as "Lenny and La Banana". Both of them are no longer in the Atlanta area but are still active in the club by email and when they're in town.

Regular meetings began in 1978 at what was then the Moreland School and is now the Little Five Points Center for Arts and Community. The club members taught juggling to the school children every week.

Today a typical meeting will draw between five and twenty-five jugglers at all levels of ability to work on individual tricks, show off new stuff, or pass props in complicated games of catch. We have others come to watch, especially in the summer months when we are outdoors. We are always happy to teach anyone to juggle. Our meetings have always been free and open to the public.

We are the oldest affiliate club of the International Jugglers Association. We hosted the IJA festival here in Atlanta in July 1985. See the picture and read the article 1 and article 2 published in Juggler's World magazine.

For many years we were a non-profit affiliate of the IJA but in April 2018 we obtained approval for our own 501(c)(3) non-profit designation with the IRS. Donations to the Atlanta Jugglers Association are tax exempt.

About the photo above from DrewBob: "This photo was taken for the promotion of the IJA festival in Atlanta. It was taken in early 1985, or maybe late 1984, on the bridge where Boulevard crossed over the spur off the Downtown Connector that became the Presidential Parkway. "Wait," you say, "there's no bridge!" That's right, there's no bridge now. It was removed and lots of dirt was put in to make a regular intersection. The old spur went under Boulevard and ended at Randolph St. (Glen Iris)"

"For many years it was the no-name exit off the Connector northbound. The big green sign was blank, except for an exit number (all exit numbers have since changed). If you turned left at Randolph, then right at Highland, you'd cross an old one-lane (!) trestle bridge over the RR tracks. There was a stop light at each end of the bridge, because it was actually one lane. Then you'd pass Patterson's Lumber and the old steelyard on the way to juggling. It was different then."
"A rare photo of me beardless". --DrewBob
From Rick Purtee in 2016: "When I heard the sad news about Ginny Slack earlier this year, this image came to my mind but could not find it at the time. This came to mind not because Ginny is in it, it was because she was taking it. The image of her standing on the yellow lines in the middle of MLK Way on a drizzly Sunday morning with her umbrella in the crook of her elbow and the camera in both hands, snapping pictures in between cars going by is forever burned into my mind. She was a kind and gentle soul who will be missed."
Left to right, top row: Richard Huber, Jeff Mather, Rodger "Lenny DeLuxe" French, Bobby Meadows, Charles Shapiro, Jerry "Gumby" McClain, Bruce Brenizer, Rick Purtee
Seated in front: Andy "DrewBob" Ford, Laura Huber, Renee Brachfield, Toni "LaBanana" Shifalo, Margaret "Bandon" LeMon, LJ Davidson Purtee

Please help support our efforts. We are a 501(c)(3) non-profit organization so your donations are tax-deductible. Add an amount and click the donate button to take you to a secure page to pay with your Paypal account or a credit card. Thank you.